Every now and then a book comes along in which I become totally engrossed. This is one such. 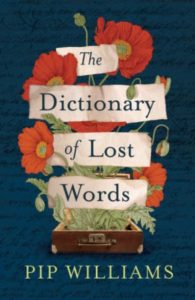 Despite its title, the book is a novel, the first by Australian writer, Pip Williams. The background is a period during the creation of The Oxford English Dictionary, which began in 1857 but wasn't completed until 1928. As evidenced by those dates, it was an enormous task requiring the labours of a team of dedicated lexicographers, led by Dr James Murray, who began work as editor in 1878.

The central character is Esme Nicoll, a motherless child, whose father works for Dr Murray. Each day, the team assembles in a shed in Dr Murray's garden called the Scriptorium to examine the words that have been sent from all over the world to be considered for inclusion. Esme accompanies her father there, where she settles under the table at which the men work.

One day, a slip of paper falls from the table bearing the word 'bondmaid'. Esme surreptitiously hides the slip and puts it into a box stored under the bed of her friend, Lizzie, a servant in Dr Murray's house. She collects more such slips and after a while she realises that some words are considered less important than others, especially those that women use. These are the words, including "vulgar" ones she picks up in the local market, that will eventually become the dictionary of the book's title.

Esme approaches adulthood at a time of increasing agitations for female suffrage, in which she becomes a peripheral player, while the narrative continues through and beyond the hellish Great War.

There is much more to this story, but it's best left to be discovered.

I don't have the words to describe why this is so engaging a story or why the novel stayed in my mind long after I'd finished reading it. All I can offer is Thomas Kenneally's prediction in 2020 that a more original novel would not be published that year.

Read this beautifully written book. You won't be disappointed.