For three months I have searched the Amazon jungle in vain for the elusive theraphosa apophysis gigantus or Tarantula Gigante, the largest, most venomous spider in the world. This dinner plate-sized arachnid is an extremely shy creature – hence my difficulty in finding one – but when provoked it can attack with surprising speed. It has been known to kill a boa constrictor, such is the striking power of its fangs.

I embarked on this expedition on behalf of my patron, Professor Joshua Appleby, the curator of the San Jose Living Earth Center. The Tarantula Gigante is the only spider he does not have, and the Center prides itself on its extensive collection of Arachnida. My objective was to return with a full-grown specimen, preferably alive. While I have collected other, smaller spiders that might interest him, the Gigante has eluded me, and the mantle of failure weighs heavily on my spirits. Presenting Professor Appleby with an empty specimen jar is not a prospect I cherish. 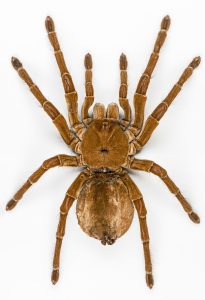 Tonight is my last night in the jungle, for tomorrow I must start the three-day journey by river to Macapá.

I wish I had brought more books with me, for night falls early on the Equator, but I had been determined to keep my baggage as light as possible. Once again, in the confines of my tent, I lift up the much-thumbed hardback copy of Pershing’s Field Guide to Amazonian Arachnida – 688 pages, with many colour plates – and gaze at the pictures of my reclusive quarry. Such a magnificent creature! Oh, those sprawling legs, those murderous fangs!

I continue reading until my eyelids droop and the heavy book slips from my hands. I lay it by my side and lower the lamp’s wick until it barely glows.

It is not surprising that I dream about Gigante – the creature has not been far from my thoughts for months. I am hunting it with a stick and a large net. It forever appears at the edge of my vision, tantalisingly close, but each time I turn it vanishes, only to reappear again elsewhere, its gimlet eyes fixed on mine. It is a frustrating dream and I come awake all of a sudden.

It is not yet dawn. I reach out and turn up the lamp.

And then I see it. With its hairy legs extending in all directions across my torso, the largest spider I have ever encountered throws a huge, menacing shadow on the tent wall.

After so many fruitless, weary days foraging in the undergrowth, climbing trees, inspecting burrows, looking under rocks, I am finally face to face with Tarantula Gigante. Summoned in my dream, my quarry has come to me. I am overjoyed. It is a moment I shall savour for the remainder of my days.

With considerable care I move my hand away from the lamp. I need to proceed with extreme caution, for I have little time in which to complete the precise manoeuvre I have in mind.

It moves forward a fraction and I am now able to see its two rows of close-set eyes. Perhaps it is a trick of the flickering lamplight, but those eyes glint with evil intent. It has raised its body and the fangs appear poised like two swords, ready to be thrust down without warning.

With all the force I can muster, I smash Pershing’s Field Guide down onto the spider, crushing it beyond all recognition.

Well, it was either him or me.